The biggest problem Mac OS users have been facing is finding an application that enables users of accessing blocked websites and encrypting their connections. This is due to the fact that Mac system is not supported by most of the proxy programs and other applications and even in the case of the presence of this application it’s either not good enough or not utilizing with the desired quality.

According to many of the experiences of users of Mac operating system from the Middle East, it is the best way to reach for sites that have been blocked is the use of so-called virtual private network, where most of the servers for the network is located in a different geographical areas than the region the user is connected from, and thus they are able to obtain a different IP address for another area has no link with the country they are connecting from area, and that’s how users can have access to blocked sites for the Mac operating system. b.VPN makes you able to connect to the Internet through a global network of VPN servers, which protects your privacy and prevents hackers from accessing your information and follow your movements and records of your Internet connection. 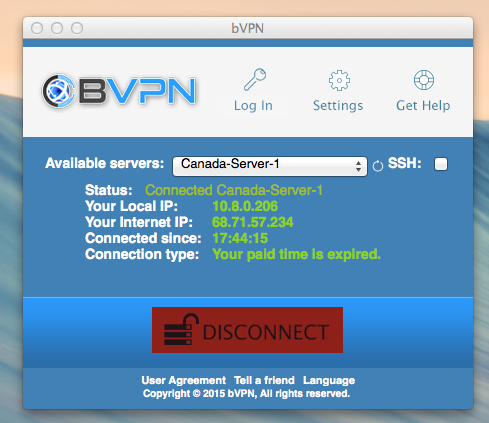 B.VPN uses both L2TP and OpenVPN/SSH encryption methods. The organization does not save logs of its clients’ browsing information. Using one VPN account, the user can establish 2 simultaneous VPN connections. B.VPN servers are located in France, Netherlands, Ukraine and United Kingdom. US servers are also available and located in California, Florida, New Jersey and New York. You have the choice between 2 encryption protocols; TCP and UDP. UDP offers the user higher speed connection while TCP offers higher encryption degree.

Establishing VPN connection on Mac can either be done manually:

To spruce up the application you should visit the site and create your own account, one of b.VPN features is that it allows you a free trial for 15 minutes daily to test the application and the extent of its quality.

There is no doubt for us that you will enjoy the following about b.VPN

2. Beneficial for people and organizations.